Throughout the competition, the students presented themselves as employees of the “What’s in the Box” firm and even had the opportunity to sell their products to consumers. The student-employees showcased their company to competing students and the firm’s administration and department presidents presented the firm’s business plan to a panel of judges. 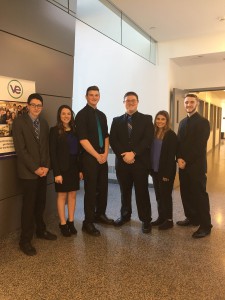 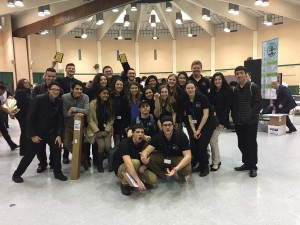 Members of the Middle Country Central School District Newfield High School robotics team recently received the Tournament Champions and THINK Award trophies for their performance in the Massapequa VEX Starstruck Robotics Competition. The team, dubbed the Roverines, finished in first place in every statistical category at the competition, and won the THINK award for having the best autonomous programming out of any other participating high school. In addition, the team was also recognized as the team with the “best overall record,” “best offensive robot,” “best defensive robot,” “best autonomous score,” and “largest win differential.”

The Roverines competed against 34 other robots, and ultimately improved upon their score last year. This victory has earned the team a spot in the New York State VEX Robotics Championship in March, where they hope to keep improving. 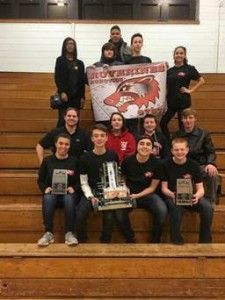 “It is an honor and privilege to have the opportunity to teach and watch the growth of these four students,” said Superintendent of Schools Dr. Roberta Gerold. “The diligence and heart represented by these four honorees is rare and we are humbled each day, as we watch them act as leaders and role models for their peers. Congratulations on this much deserved achievement.”

Centereach High School senior, and December student of the month recipient, Colin Birch was chosen for his remarkable growth throughout his academic career. Starting out as a shy student who struggled with his grades, Colin discovered his strengths in technology courses and began serving as a mentor for his fellow students. Colin has taken and aced every technology-focused course offered at Centereach High School—including Design and Drawing Production, Electronics, Computer Repair, Programming and Design, Computer Graphics and C++ Programming. He is also a member of the National Technical Honor Society and the Audio Production BOCES program.

Colin is described by his teachers as having “rare, heartfelt sincerity” and is recognized for his positive attitude, his politeness, diligence and kindness. Colin has applied to a variety of tech schools and is awaiting acceptance to study as a computer/audio engineer.

Tyler Berns is a senior at Newfield High School. He has the potential to graduate with a total of 30 college credits and a 92.0851 GPA—thirteenth in his class. Tyler is described by Principal Scott Graviano as a “Jack of all trades,” excelling in academics, music and extracurricular activities. Tyler is currently the President of the Tri-M Music Honor Society, member of the National Honor Society, the Thespian Honor Society, the Foreign Language Honor Society and the Percussive Honor Society—for which he is a student delegate for the New York State Chapter. He is also a member of the leadership club, President of the Book Club and has been a Varsity Tennis player since 2013.

Tyler has put his heart into excelling in his music studies, and he has been acclaimed by his teachers as the best in his class. He was also selected by the Suffolk County Music Educators Association as a member of the All County Percussion Ensemble, the All County Band and the All County Orchestra. In addition, Tyler has been a percussionist for the New York Youth Symphony, the Sound Symphony Orchestra and was selected as an alternate for the St. Agnes Cathedral Christmas Orchestra. Tyler awaits acceptance from a number of colleges where he will study music performance for percussion.

Dawnwood Middle School sixth grade student, and December student of the month, Diego Avendano was chosen for his unbelievable work ethic. After arriving in the United States from El Salvador just over a year ago only speaking Spanish, Diego has almost mastered the English language. He has successfully moved from the “entering” status to the “transitioning” status within the District’s English as a New Language program. This is a rare feat for such a short period of time. Diego continues to display his diligence by attending the ENL After-School Study Sessions twice a week. Diego is also interested in different extracurricular activities such as trying out for the soccer team next year, maintaining his role in the Hispanic Heritage Month activities—all while maintaining an 89 GPA.

Isabella Yanotti is a sixth grade student at Selden Middle School and has already achieved High Honor Roll status after one quarter with a GPA of 94.33. In addition to her passion for education, Isabella is also passionate about giving back to her school and community. She is a member of the service club, through which she has fundraised for the STAR wildlife rehabilitation center collecting and recycling bottles. She also brought in 175 canned food items for the Thanksgiving Food Drive. Outside of school, Isabella also gives back through her church—recently making beaded angel ornaments for children in the hospital during the holidays. Isabella is described by her teachers as “one of the most compassionate and empathetic students” and as “a true role model for her peers.” Isabella’s future career goals include management of a Walt Disney World Resort. 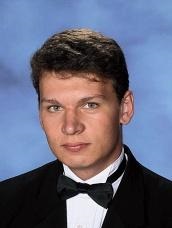 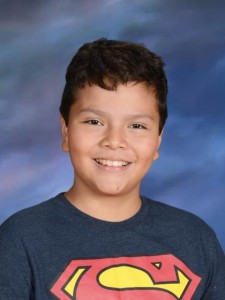 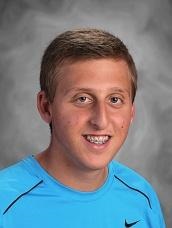 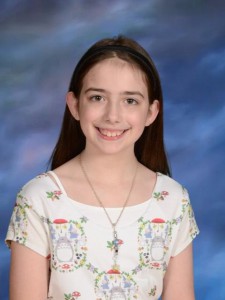 The Middle Country Central School District recently arranged for students at District’s Unity Drive Pre-K/Kindergarten Center to ride the Polar Express as part of an interactive reading comprehension lesson. Principal Debbie Wolfe read the The Polar Express, by Chris Van Allsburg, to students in Ms. Lozzi and Ms. Brennan’s classes. Then, the story came alive as the students boarded the train and used their imaginations to go on an adventure.

Students received a Polar Express ticket that was “punched” by the conductors—played by the teachers—to board the train, which was actually two long tables turned on their sides with painted paper decorations of windows and wheels.

The students sat in rows of two, side-by-side, on the train as they were treated to chocolate milk and a cookie before arriving at Santa’s Village. Once at Santa’s Village, Santa Claus himself handed out little bells on necklaces to each student. 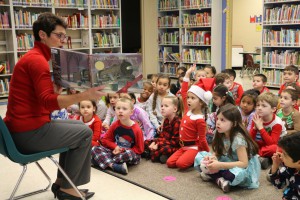 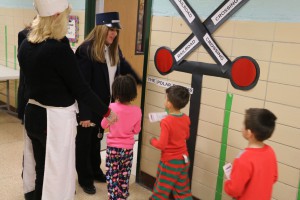 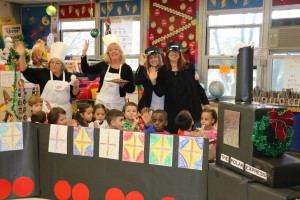 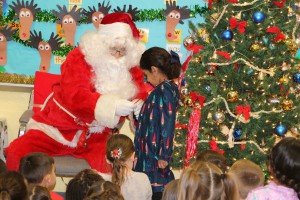