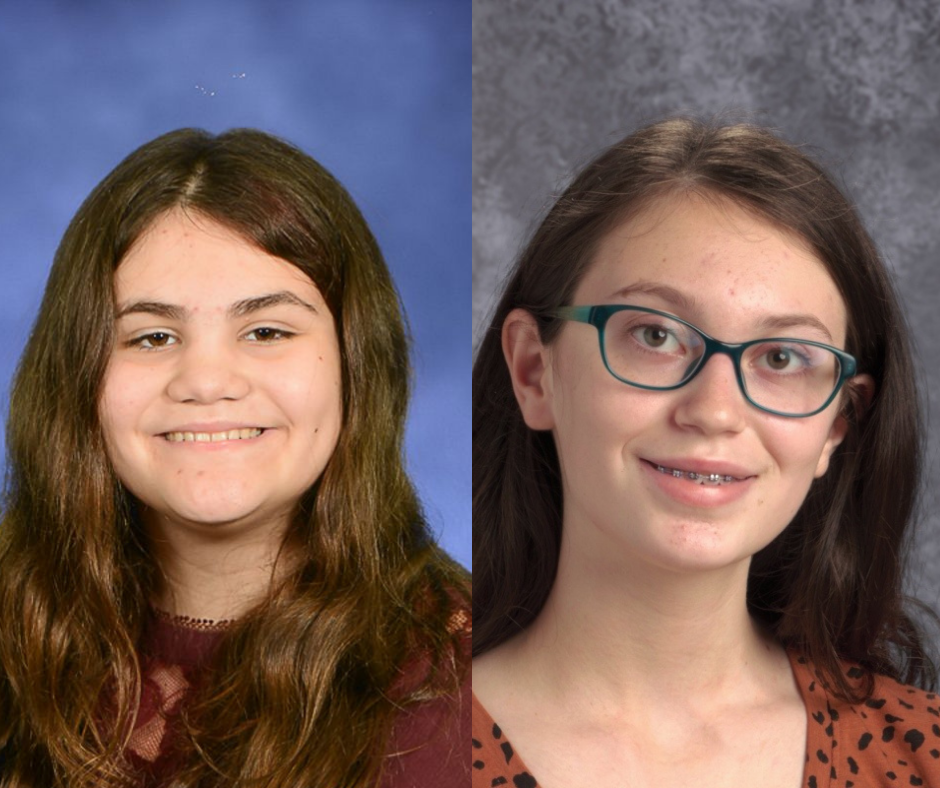 The Middle Country Central School District is proud to recognize two middle school students—Julia Zabinsky and Liana Chivu—as students of the month for May. The two students were recognized for their academic excellence, participation in school activities and clubs, and brilliant attitudes.

“It is with great enthusiasm that I acknowledge Julia Zabinsky and Liana Chivu for their academic success and distinguished character,’ said Dr. Roberta Gerold, superintendent of Middle Country Central School District. “It is an honor to have the opportunity to watch the growth of these two students, who are positive role models for their peers. I can’t wait to see their journey in high school in the coming years.”

Selden Middle School eighth-grade student Julia Zabinsky was nominated as student of the month for her maturity, intelligence, and positive attitude every day. Julia’s unmatched work ethic is shown through her meticulous lab work and constant desire to complete extra credit assignments, despite having a perfect grade score of 100 for the quarter. Julia also had a perfect 100 each quarter in her living environment class.

Although Julia is a strong student academically, she is much more than her grades. Julia is devoted to community service and helping others. She is a Junior Environmental Steward with the Town of Brookhaven and has helped with clean-ups and wildlife preservation on south shore beaches. These projects helped save diamondback terrapin turtles who have been consuming litter and are in danger as they move about crossing roads.  Julia also enjoyed helping with the Happy Hearts project in which she assisted special needs students with their sewing.

Julia is also a lover of animals, especially those that are challenged.  She has adopted three special needs cats, two of whom are blind and the third who is partially blind. She also appeared on television during the Kitten Bowl which airs on Super Bowl Sunday to advocate for special needs animals. Julia’s dream is to become a veterinarian one day.

Dawnwood Middle School seventh-grade student Liana Chivu was nominated as student of the month for her great respect for her fellow classmates and her remarkable spark for learning and education. She is an active member of the classroom as she helps her friends and contributes her thoughts, ideas, answers, and questions.

Liana is a member and the president of the Dawnwood National Junior Honor Society. She is involved in many clubs and activities at Dawnwood including Peer Leadership Club, Technology Club, American Sign Language Club, and Drama Club. Liana is also a member of the Competitive Sachem Swim Club and devotes many of her lunch periods to volunteering at the school store.  Liana’s overall average for her sixth grade school year was 99.67 and her average for this school year is 98.8. She plays clarinet in the Dawnwood band and often works with students in her ENL afterschool study sessions. She has career hopes of working in the field of space exploration. 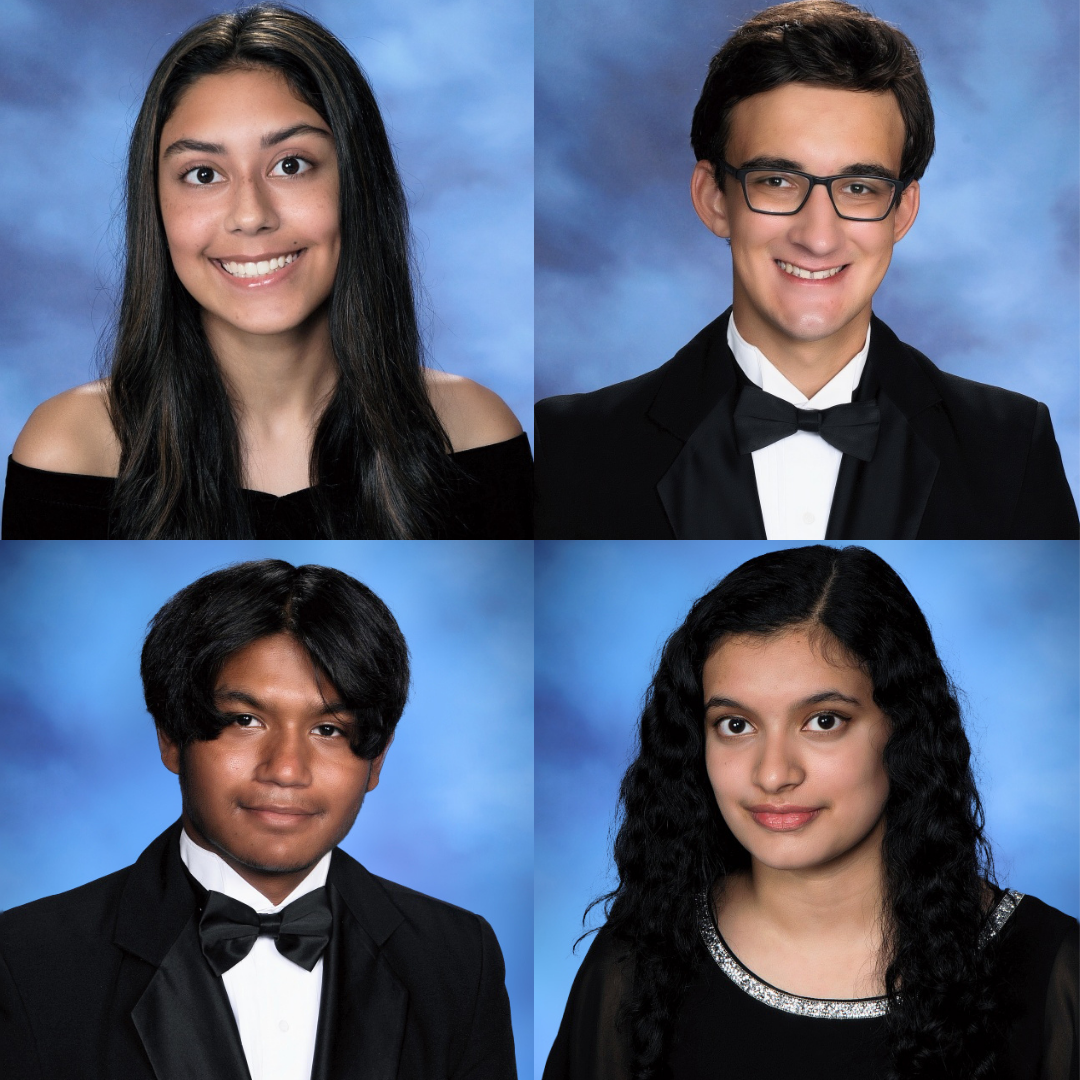 The Middle Country Central School District has officially named its top scholars for the Class of 2022. Centereach High School announced Nicholas Matter and Isabella Fiore as valedictorian and salutatorian, respectively, and Newfield High School announced Dora John and Abu Kalam will be valedictorian and salutatorian, respectively, for the Class of 2022.

Centereach High School valedictorian Nicholas Matter is an exceptional and well-rounded student. Upon graduation, he will have completed 12 AP courses with an additional two college-level courses, allowing him to enter college with more than 40 college credits. Nicholas has never received a score of less than a 4 on any AP test.

Nicholas is a member of the National Honor Society, Tri-M Honor Society, Jazz Band, and the school’s math team, of which he was president last year. He is also an accomplished musician, scoring a perfect six on his most recent New York State School Music Association (NYSSMA) solo, and has participated in Suffolk County Music Educators’ Association (SCMEA) performances for the past six years. Nicholas is also a strong athlete. He has been a valuable member of the varsity soccer team for the last two years. He was recognized by Suffolk County as an All-Academic player this past season. Nicholas has worked at Brookhaven National Lab, where, through their mentoring program, he developed a tool used by other developers to automate testing. The valedictorian has been accepted and will attend Binghamton University in the fall where he will study computer science. Nicholas boasted a weighted GPA of 102.7.

Centereach High School salutatorian Isabella Fiore is an involved student in her school and community as well as maintaining a stunning academic record. By the end of the school year, she will have completed 11 AP courses along with an additional three college-level courses.

Isabella is a member of the National Honor Society, National Art Honor Society, Italian Honor Society, National Technical Honor Society, Distributive Education Clubs of America ( DECA), Environmental Club, and the History Club. She has been a cross country runner, twirls baton, and is a competitive swimmer and lifeguard. Isabella is well known throughout Centereach High School as a talented artist. She has taken elective classes such as fashion design, crafts I and II, and advanced drawing and paintings. After graduation, Isabella plans to focus on her goal of becoming a doctor. She has been accepted to Nova Southeastern University’s Honors College as a neuroscience major. She received dual admission to Dr. Kiran Patel Medical School to pursue her goals. Isabella boasted a weighted GPA of 101.8.

Dora volunteered as a techno buddy, a book buddy, and an art buddy through the Middle Country Public Library. She currently sits on the teen advisory council of the public library, serves as a teen book reviewer for the library, and is a hospital volunteer at Stony Brook University Hospital. In the fall, Dora will be attending Cornell University as a Human Biology, Health and Society major. She boasted a weighted GPA of 103.3542 and has the potential to graduate next month with more than 50 college credits.

Newfield High School salutatorian Abu Kalam locked in the number two spot earning him a salutatorian title with a weighted 101.3625 GPA. At the end of his high school journey, Abu will have two college-level and 14 advanced placement classes which combined a total of more than 50 college credits.

Abu has been a member of the varsity tennis team, National Technical Honor Society, National Honor Society, secretary of DECA, and president of the 2022 Senior Class. Outside of school, he earned the Gold Presidential Volunteer Service Award for completing 100 hours of community service at Stony Brook University Hospital. In addition, Abu interned through Perry Gershon’s and Jackie Gordon’s campaigns for congress. Abu is set for Honors College at Stony Brook University in the fall. He will be majoring in economics with the long-term goal of consulting and then entering the world of politics. 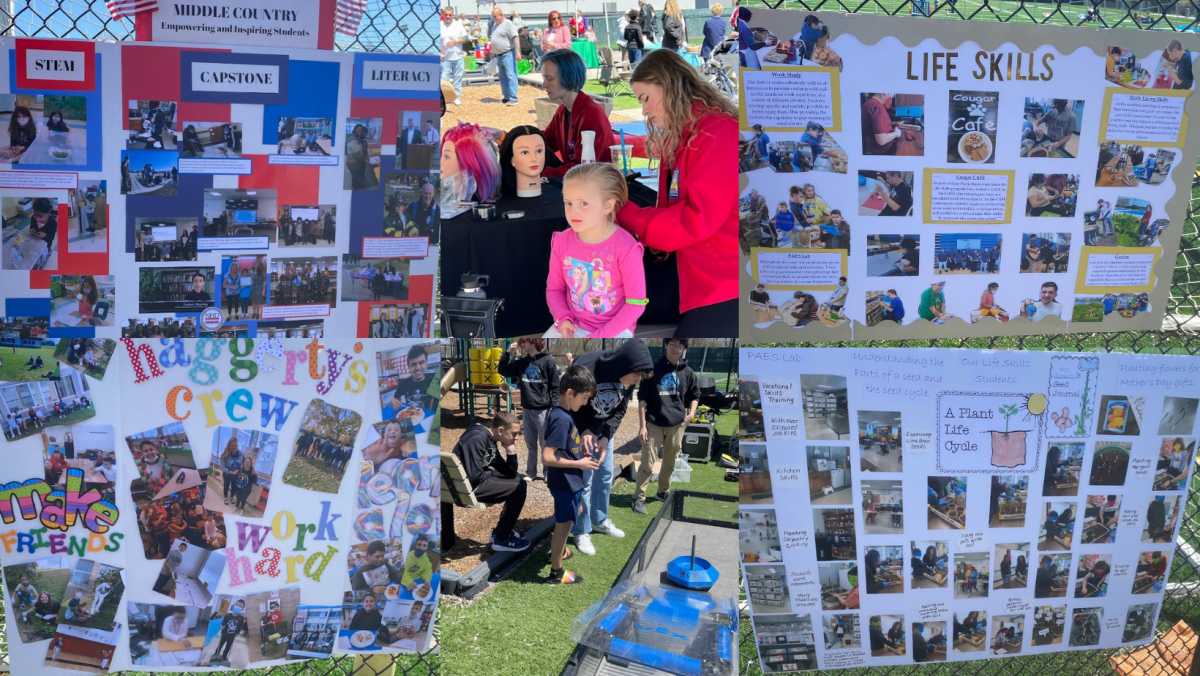 Recently, Career and Technical Education students and teachers participated in the community festival organized by the Middle Country Chamber of Commerce. “Students, staff, and community members had an incredible time at the Middle Country Community Fair and Music Festival,” said Dr. Roberta Gerold, Superintendent of Schools. “In addition to providing our students an opportunity to demonstrate their skills and knowledge to the entire community, the day was a wonderful chance for family and friends to get together, enjoy the warm weather, and engage in some educational activities.”

The District’s Robotics team assembled field tiles and a perimeter for the actions of their robots. Fairgoers had the opportunity to learn about the programming and building of a competitive Vex robot. Robotics team members demonstrated their skills and then festival attendees were given the opportunity to operate the robots as they navigated different skill challenges.

Newfield Cosmetology students were also at the festival, demonstrating various hair cutting techniques and stylings on mannequins. Attendees were treated to hair braiding and quick and trendy updos.

Family and Consumer Science students from the Child Development program worked with younger attendees to create coloring activities, make friendship bracelets, and participate in interactive games. The high school students used their knowledge of the stages of child development to effectively work with each child that participated. In addition, poster boards of different student Capstone projects, STEM activities, and literacy initiatives were on display. Haggerty’s Crew advised by Ms. Haggerty, Selden Middle School’s Life Skills teacher provided a collage of various activities they’ve participated in, and the Life Skills students created a project board display of activities in the PAES Lab, Cougar Café, work-study, and garden activities. 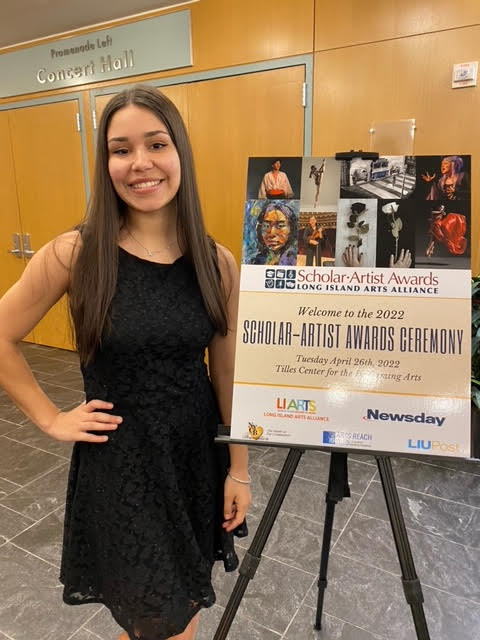 Arabel was recognized for her achievements at the recent LIAA ceremony held at the Tilles Center for the Performing Arts at Long Island University. She is one of the very few students who was selected on Long Island based on her high academic achievements, impressive music portfolio, and glowing teacher recommendations.

“We are incredibly proud of Arabel and her accomplishments,” said Dr. Roberta Gerold, superintendent of schools. “A special thanks to her orchestra teacher, Mr. Dan Martinez for being her mentor and fueling her passion for music!”

Formed in 2003, LIAA is an alliance of and for the region’s not-for-profit arts, culture, and arts education organizations. Its mission is to “promote awareness of and participation in Long Island’s world-class arts and cultural institutions”. LIAA offers guidance and various support services to arts organizations and serves as an advocate for arts education in schools.