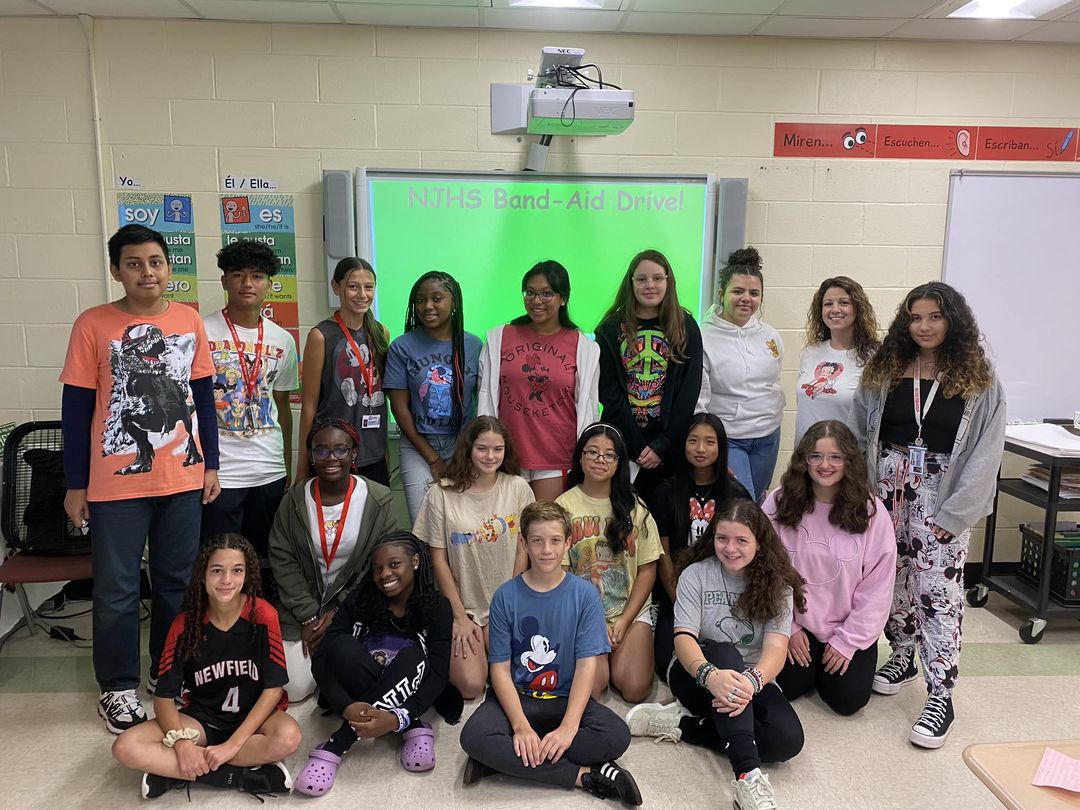 “I am incredibly proud of our students. Our National Junior Honor Society members meet on a monthly basis and complete a minimum of 12 hours of community service. Throughout the year, the members participate in various activities such as clothing drives, book drives, fundraisers, and many other school-related activities,” said Andrew Bennett, Principal of Selden Middle School. “Thank you to everyone who donated band-aids and I am looking forward to seeing what else our students will come up with to give back to our wonderful community!”

Currently, there are 43 eighth-grade students at Selden Middle School who are in the National Junior Honor Society. The students wore bright, colorful, or character-related clothing during their school-wide Spirit Day to kick off their fun band-aid drive.

“Our National Junior Honor Society students make a commitment to the values of scholarship, service, leadership, character, and citizenship. They are not only leaders in the classroom, but they also seek to make our school and world a better place,” said Jacyln Rose, National Junior Honor Society Advisor. “These students continue to blow me away with their drive and sense of community. I am so proud to advise them and provide them with opportunities to demonstrate their outstanding qualities and be recognized  for all that they do!” 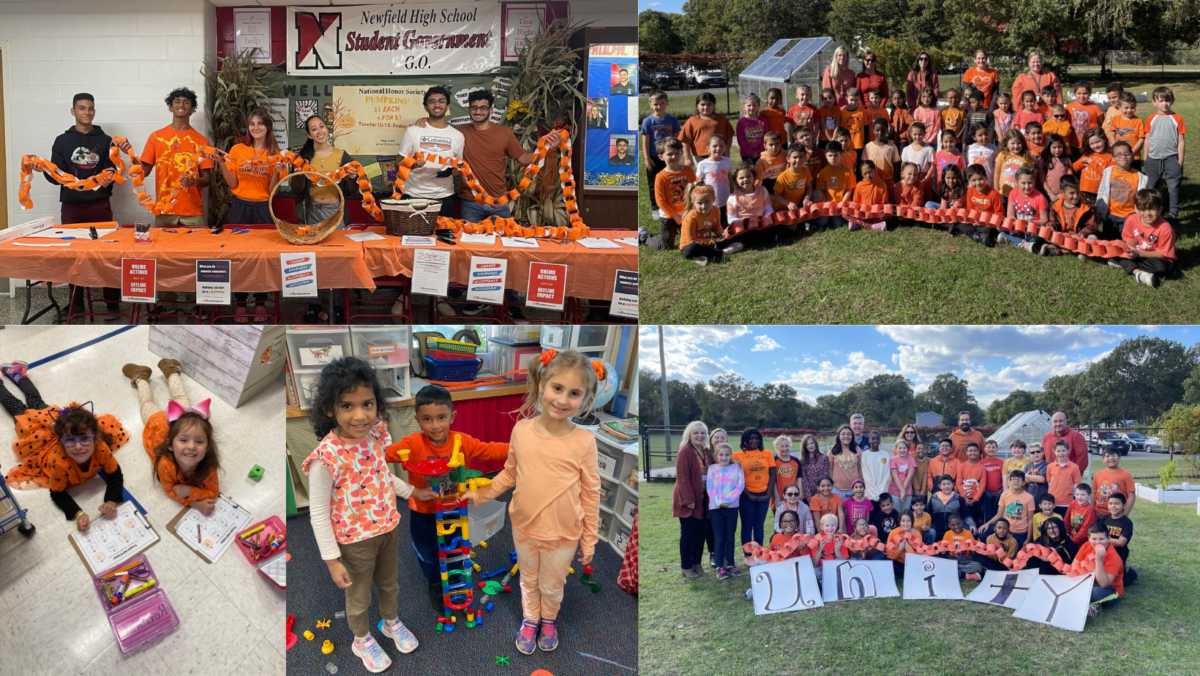 Students across the Middle Country Central School District sported the color orange and held various activities in honor of Unity Day. This day is organized nationwide by PACER’s National Bullying Prevention Center and is celebrated as a signature event for bullying prevention month.

“Unity Day is a day to raise awareness for our students to promote solidary amongst each other and to stand against bullying,” said Dr. Roberta Gerold, Superintendent of Schools. “It was inspiring to see schools in our District celebrate Unity Day in their own special way and students, faculty, and staff sporting  orange attire in a unified message of togetherness.”

Students created unity chains out of orange construction paper to drape across the hallways as a symbol of togetherness and to show that they are linked together. Students talked about what bullying is, how to stand up to bullying and how to get help when needed to fight back against bullying. 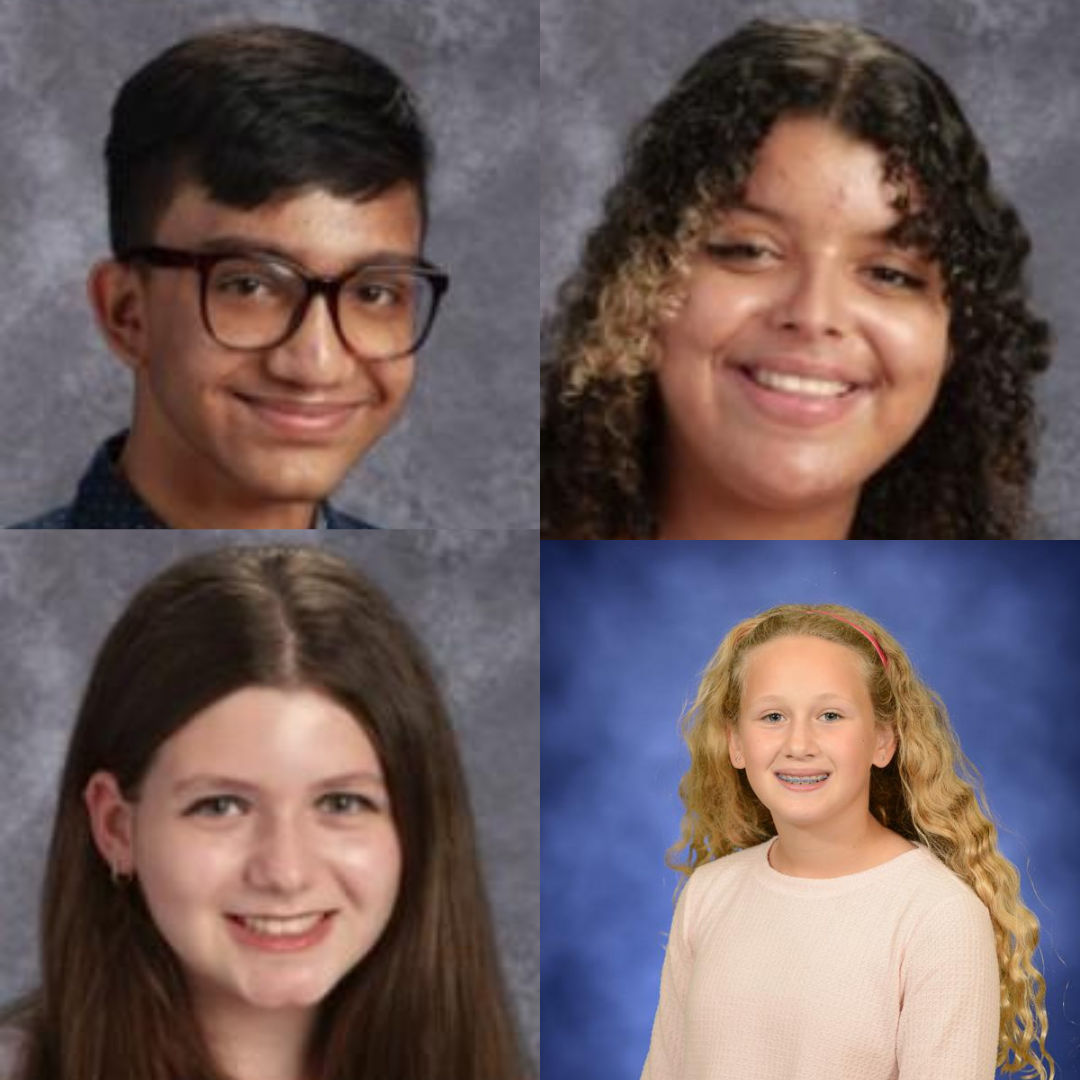 The Middle Country Central School District is a community of exceptional students whose achievements continuously deserve acknowledgment. Congratulations to Wazdi Khan, Julissa Spooner, Jessica Cohen, and Lilly DiGiamo for being named the District’s students of the month in October.

“Wazdi, Julissa, Jessica, and Lilly are great examples of the smart, talented, and driven students in our District,” said Dr. Roberta Gerold, Superintendent of Schools. “Recognizing and congratulating the work and the accomplishments of our students is one the wonderful highlights I look forward to each month. I am incredibly proud and inspired by  the continuous efforts our students put into their academics and extracurriculars as exemplified by these impressive four students!”

Centereach High School student Wazdi Khan is a well-rounded student who serves as the high school’s  GO President. He was instrumental in the planning and the great success of Centereach High School’s pep rally and Cougar Carnival for Homecoming. Wazdi is involved in numerous clubs,  including the history club, yearbook club, and environmental club. He is also a member of the National Honor Society, Tri-M Honor Society, World Language Honor Society, and Chamber Orchestra. Academically, Wazdi truly excels. His GPA ranks him in the top ten percent of the Class of 2023. His transcript is truly impressive with the diversity of courses he has taken. Wazdi will graduate this year with 12 Advanced Placement courses and three additional college-level courses. These could give Wazdi over  40 college credits before graduating from high school. The Centereach High School senior applied to numerous schools, including Stony Brook, New York University, Cornell, and Columbia University. At college, he plans to study computer science.

Newfield High School student Julissa Spooner is full of positive energy and is always looking to make the world around her a better place. She volunteers at Avalon Nature Preserve in Stony Brook and has worked as a camp counselor at Centereach Pool Camp. She has been named an All-Long Island fencer and plans on continuing at the collegiate level. In addition to fencing, she is a member of DECA, Vice President of the Class of 2023, GO President, and plays bass in the high school’s orchestra.  Julissa has the potential to graduate in June with 30 college credits. She applied to Oneonta, Binghamton, and Suny Albany. Given her love for the planet, she’s looking at majoring in environmental engineering. She is also very interested in environmental policy.

Dawnwood Middle School eighth-grade student Jessica Cohen is the perfect example of a school leader. She plays soccer and basketball for Dawnwood Middle School and also played junior varsity softball. She will be trying out for volleyball and is also considering trying out to play lacrosse this year. Outside of the classroom, Jessica has been involved in many activities both inside and outside of school. She was a member of the drama club stage crew where she worked in the south booth to control the lights and sound. She was a member of the Lego club, art club, service club, and Vice President of the photography club. During the summer, Jessica sells 17 different flavors of snow cones in her driveway. Jessica’s overall average for her 6th and 7th grade school years is 97.88 and her average for the first quarter of this school year is 99.

Selden Middle School eighth-grade student Lilly DiGiamo is the very personification of service to others. It is her nature to think of those who are less fortunate. Shortly after the war in Ukraine began, Lilly organized a drive at Selden Middle School to gather medical supplies to be sent overseas to the battlefront. She collaborated with a church in New York to get the supplies to where they were needed the most. Lilly is a member of the Selden Middle School tennis team, member of the National Honor Society and plans on joining the Youth for Humanity Club and hopes to make the volleyball team later this year. She maintains a very high average in all her classes;  her quarterly average has always been 96 or better since the beginning of sixth grade. 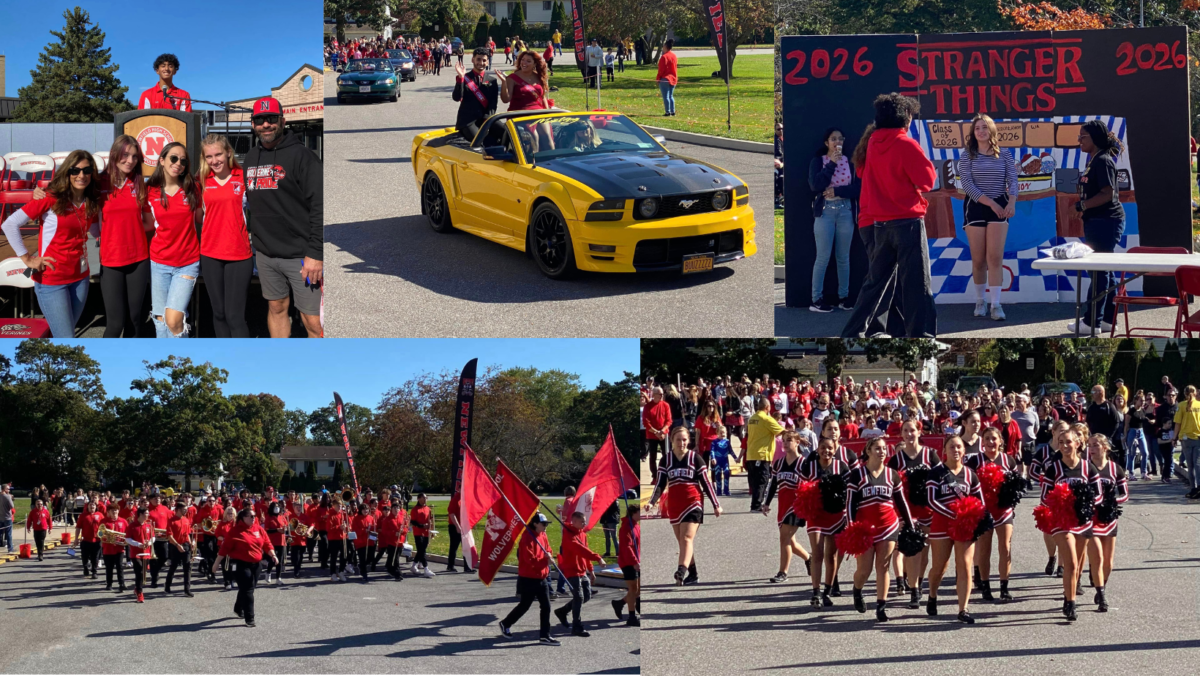 Every year, hundreds of students and families look forward to homecoming. This year’s homecoming celebration included our students performing various skits, a car parade, and the halftime show.

“Homecoming is a great opportunity to celebrate the start of a new school year which is full of promise, opportunities, and accomplishments. Every year, our students put on a homecoming event filled with incredible school spirit and pride,” said Dr. Roberta Gerold, Superintendent of Schools. “Thank you to the faculty, staff, and community members who helped make this year’s Newfield High School homecoming weekend such a huge success!”

In honor of Fire Prevention Week, firefighters from the Selden Fire Department visited the New Lane Memorial Elementary School to speak to students on how to prevent fires and what to do if there is a fire. The elementary school students were also able to ask questions and learn about the fire safety types of equipment the firefighters use in their fire trucks. 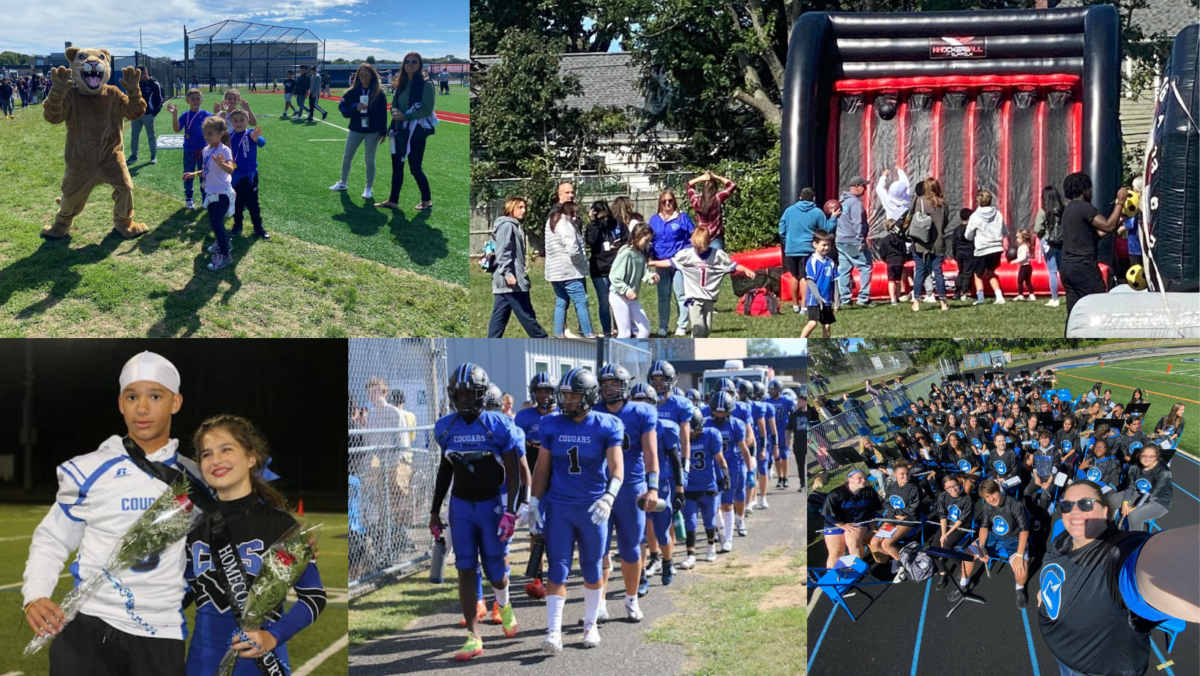 “It’s always wonderful to see the energy, laughter, and great enthusiasm from our students, families, and our community,” said Dr. Roberta Gerold, Superintendent of Schools. “I love the level of pride and support that exists within this community. Special thank you to Laura Melfi, Student Activities Advisor, Dina Tiles, Students Activities Secretary, and the support of the administration and community members who helped coordinate the homecoming weekend!” 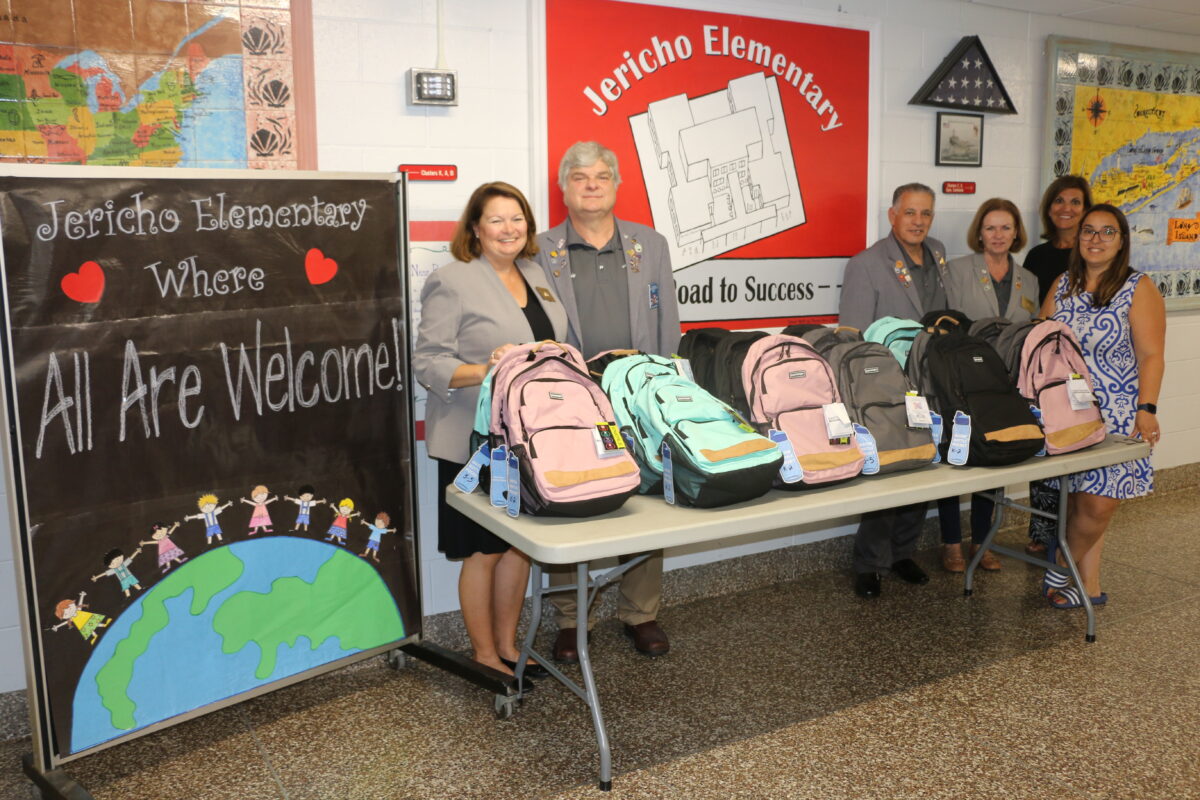 Every year, community members, families, the District’s PTAs, and businesses of the Middle Country Central School District come together to donate school supplies and backpacks to support the District’s students. This year was the first year students received donations from Old Navy, Port Jefferson Elk’s Lodge, and Healing Waters Church. Businesses such as Costco that have donated in the past were also contributors this year. Families of Middle Country Central School District were able to pick up donated school supplies and backpacks at their school.

“A huge thank you to everyone who donated school supplies and backpacks to support our students,” said Dr. Roberta Gerold, Superintendent of Schools. “The Middle Country Central School District has countless supporters and we are so grateful to have our community come together for our students.” 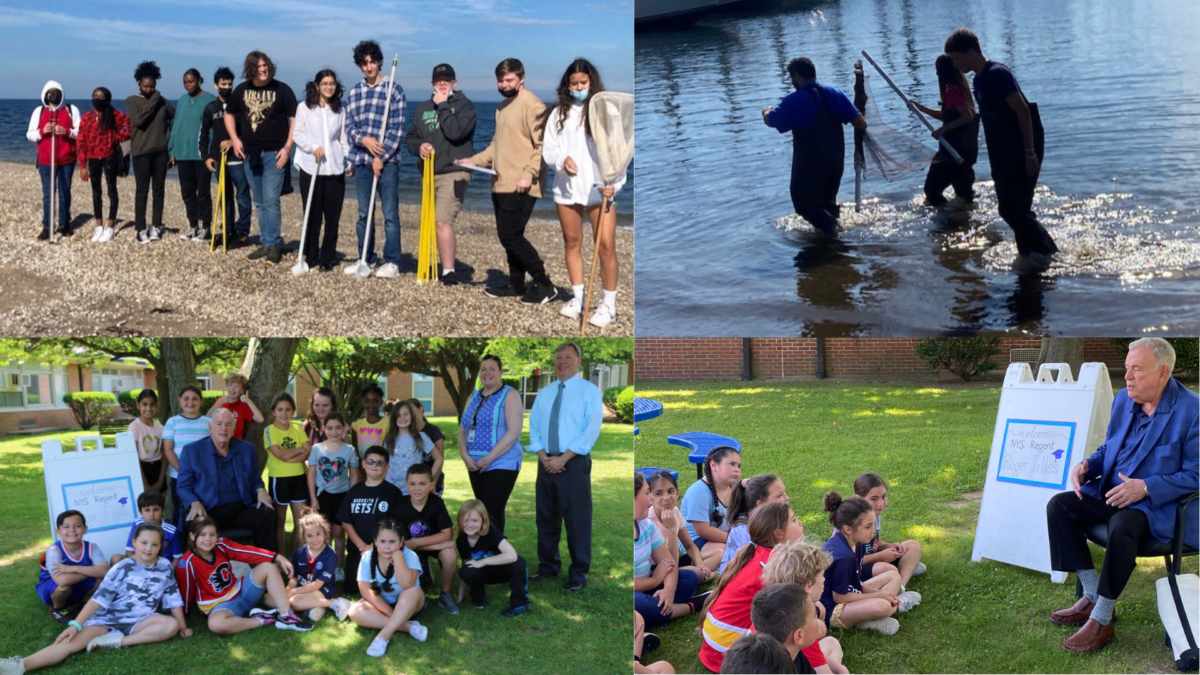 Middle Country Central School District’s Capstone Project Program is a unique program that challenges its students to complete regular research projects throughout their educational journey in the District.

“The Capstone Project Program empowers students to become independent critical thinkers and versatile, multiskilled students,” said Dr. Roberta Gerold, Superintendent of Schools. “The program first started in the 2014-2015 school year when we freshened up our STEM education and inquiry learning initiatives. This led to the creation of committees to examine and revamp our curriculum, focusing on creative problem-solving and research skills, with real-world connections to science and math.”

As of 2024, the Middle Country Central School District will be the only district across Long Island that requires the completion of a Capstone Project for graduation. Elementary school students are introduced to research skills adapted from the Big6 Research Model, a process leading students through six fundamental steps to answer information-based questions. Students will be taken through a series of structured activities and lessons leading to the selection of an information problem and the identification of reliable resources necessary to create a final project.

“Before the Capstone Project, I didn’t even know what a bibliography was, but now I know how to write one for both a website and a book,” said Katelyn Treharne, Holbrook Road Elementary School student. “My Capstone will be a 13-page report and the creation of a presentation on a trifold board!”

At the Middle School level, eighth-grade students are required to complete two Capstone experiences, one involving scientific research in connection with their living environment lab, and a second Capstone project involving humanities research adapted from the National History Day model.

In high school, students are given independence to determine their own culminating Capstone experience. Students have the option to demonstrate their research skills by developing a research project in conjunction with an extracurricular activity.  They have to select a completely independent topic to research under the guidance of a Capstone advisor or librarian and engage in a project outside of school where they can exercise their research skills under the supervision of a community-based mentor.

“The Capstone Project is a unique opportunity for each student in our District to explore, examine, and research a topic that they are passionate about,” said Robert Feeney, Middle Country School District Board of Education Vice President. “The skills acquired throughout the process will strengthen their success in all their classes and may even set the course of their future career path.”